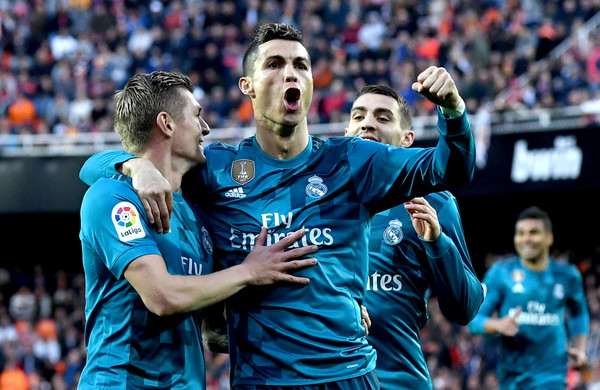 While his counterpart has indicated he does not know who will make up his team against the Spanish giants, the Madrid boss is sure of his side

Zinedine Zidane has already decided on the team he will select for Real Madrid’s Champions League home tie with Paris Saint-Germain on Wednesday.

Madrid warmed up for the last-16 first leg with a 5-2 demolition of Real Sociedad at the Santiago Bernabeu in La Liga on Saturday, Cristiano Ronaldo scoring his first club hat-trick of the campaign.

Zidane left Casemiro out of his squad, while Luka Modric was withdrawn for the final half-hour and Gareth Bale was given 17 minutes from the bench.

But Ronaldo played the full 90 minutes as Zidane instead took off youngsters Marco Asensio and Lucas Vazquez, who headed a first-minute opener from Ronaldo’s left-wing cross.

“I know [the XI], but we will see on Wednesday,” Zidane told reporters, after Unai Emery suggested he was unsure over the make-up of his PSG selection.

“Everyone is ready to play on Wednesday and I do not want to say who will come out.”

Of Madrid blitzing Sociedad by racing into a 4-0 lead before the interval, Zidane added: “The first half was phenomenal, we scored fast, we pushed, we put intensity in.

“Then we controlled the game and made the changes, thinking about the next game, but I’m happy.

“It makes things easy when you score in the first minute. It was the full first half in this way, intense, determined, motivated. It was a good way to prepare for Wednesday’s game.

“We have to correct certain things, especially in the second half, but I am left with the positive side, with the five goals and our start of the game. Wednesday will be another game and we will have to put in another effort.”

While Ronaldo has hit top form in timely fashion ahead of the PSG clash – he has scored more goals in La Liga in 2018 than any other player – Karim Benzema drew another blank.

“The important thing is that he thinks about the next match, which will change his streak.

“You asked me if I was worried about [Ronaldo] and then you have three goals, we know he always wants to score, PSG will have to be careful with him.” Benzema hit the post in the early stages and missed a fantastic stoppage-time chance to break a seven-game drought in the league, prompting Madrid fans to whistle the French striker.

“I do not know why they whistle him,” Zidane said of Benzema, who has only hit two La Liga goals this term.

“People come to the stadium and can do what they want, he had chances to score and he did not.