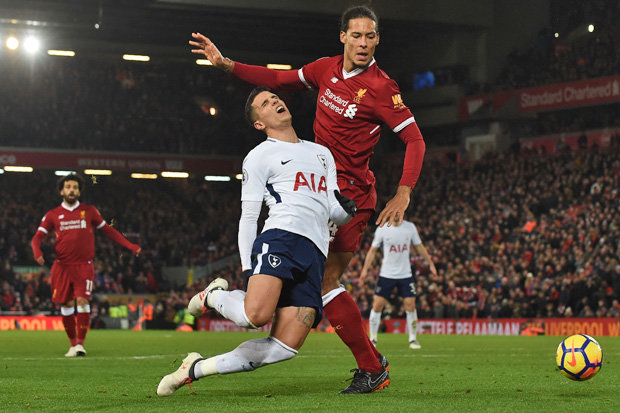 Harry Kane has rejected Virgil van Dijk’s claim that he dived to win a penalty in Sunday’s 2-2 draw between Liverpool and Tottenham Hotspur.

Spurs were awarded two penalties at Anfield, when Kane went down in the box under a challenge from goalkeeper Loris Karius in the 87th minute and for a Van Dijk foul on Erik Lamela deep into injury time.

Although Kane missed his first attempt from the spot, his second sealed a point for his side and took his Premier League tally up to 100 goals in his career and 22 for the season.

But the 24-year-old was criticised afterwards by Reds defender Van Dijk, who insisted Kane dived to win the first penalty and that the second was undeserved, too.

The England international dismissed the notion, however, saying he was definitely fouled and assistant referee Eddie Smart was correct to flag for the trip on Lamela later on.

“Yeah. [Karius] has dived, he has got in the way and I’m a player, I’m not going to jump out of the way because it’s football,” Kane said of the first penalty incident.

“It was a roller coaster of emotions. Obviously getting the first penalty you are thinking ‘I’m going to score the winner’ and then miss it and then it goes down the other end. I’ve got the team down and get another one (penalty) and now I’ve got to step up again. I was delighted to score it and get my 100th goal and delighted to get something out of the game, which I thought we deserved.”

The striker was disappointed to see his initial attempt saved by the home side’s goalkeeper, but there was “never a doubt” that he would convert his next shot.

“The first one was essentially what I wanted to do, go down the middle,” he added. “I have a routine, I went through it and the keeper just stood there and saved it.

“Sometimes that happens so as a striker you just have to deal with it and hope the next one will come soon. Thankfully it did and I was able to put the second one away.”

After reaching another milestone, Kane is already looking to complete another century of goals as he aims to continue his development and become one of the best in the world.

“It is nice, I am going to enjoy the moment, but let’s see how many I can get this year and go from there.

“Hopefully I can get better and better. I am 24 years old, that’s not young but it’s not old so I’ve still got a lot of learning to do. I feel I am getting more experience year by year and I feel I am getting stronger and more physical and hopefully that just continues. I will always keep trying to work hard and get better and hopefully that will be the case.

“That is what separates good players from great players: can you do it consistently year after year? Can you get better and better when people don’t expect you to? That’s what I’ve done so far and that is what I will continue to strive to do. That is always my mindset to never let up. It is a short career and I’ll try to do as much as I can in it.”