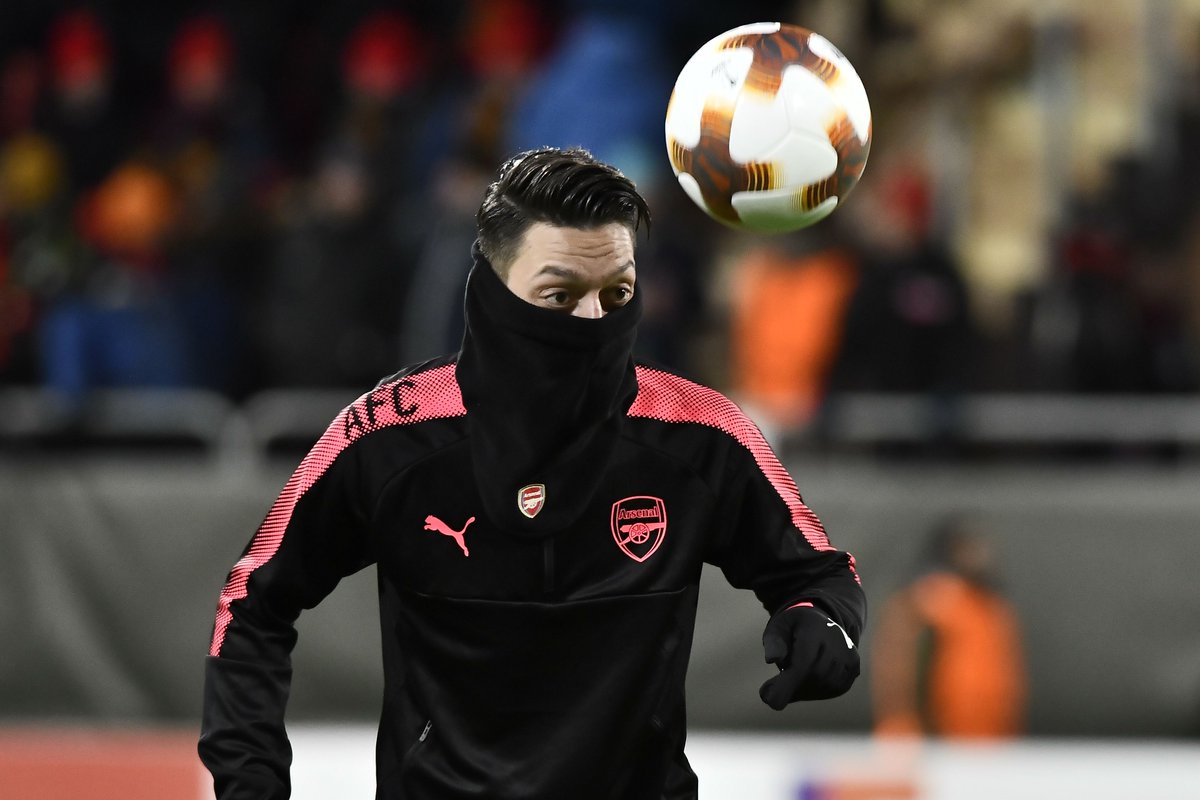 Nacho Monreal and Mesut Ozil were on target either side of a Sotirios Papagiannopoulos own goal as Arsenal eased to a 3-0 win at Ostersunds.

Arsenal avoided any undue alarms as they cruised to a 3-0 Europa League win over Swedish minnows Ostersunds.

Arsene Wenger’s men emerged in sub-zero temperatures at the Jamtkraft Arena and there was little prospect of the contest warming up after defensive errors from the hosts gifted a 13th-minute opener to Nacho Monreal.

Sotirios Papagiannopoulos’ own goal compounded matters for Ostersunds and their English coach Graham Potter and, although their performance improved, Mesut Ozil marked his first appearance in the Europa League this season with a third in the 58th minute.

A run to the last-32 featuring wins over the likes of Galatasaray and Hertha Berlin has seen Ostersunds’ produce a modern footballing fairytale in the Europa League this season.

They will need something altogether more fantastical to turn the tie around at Emirates Stadium next week – even more so after Tom Pettersson had a stoppage-time penalty saved, Hector Bellerin having needlessly hauled down substitute Tesfaldet Tekie.

Ostersunds goalkeeper Aly Keita put his side in trouble with a poor pass out in the 12th minute, only spared when Papagiannopoulos bravely blocked from Ozil, and his poor handling allowed Monreal to follow up Alex Iwobi’s shot and open the scoring moments later.

The entirely avoidable nature of the goals conceded by a seemingly overawed Ostersunds will have irritated Potter and Papagiannopoulos was powerless to avoid a 24th-minute own-goal after Pettersson gave away possession inside his own box for Henrikh Mkhitaryan to drill into the goalmouth.

Some similarly slack work in the defensive half from Arsenal prompted the hosts’ first opening, with David Ospina acrobatically pushing over Alhaji Gero’s shot from the edge of the area.

Ostersunds had grown into the contest as half-time approached and striker Saman Ghoddos drove at a backpedalling Arsenal backline to fire narrowly wide.

Potter sent on Tekie and Jamie Hopcutt in place of captain Brwa Nouri and Gero, a move that further encouraged his team’s resurgence in the contest.

Shkodran Mustafi turned anxiously to the referee before the hour when Tekie went down in the area under pressure from the Germany international. Play was allowed to continue and Arsenal glided down the other end to make it three.

Ozil exchanged passes pleasingly with Mkhitaryan but Keita was culpable once again, getting his hands to a shot that squirmed over the line.

Much of the remaining action resembled an extended training drill as far as the Premier League side were concerned, with prospects of defeat to a club who have been in existence for a shorter time than Wenger has been Arsenal manager all but extinguished by the time Pettersson rounded out a dismal individual outing by stroking his penalty into Ospina’s arms.